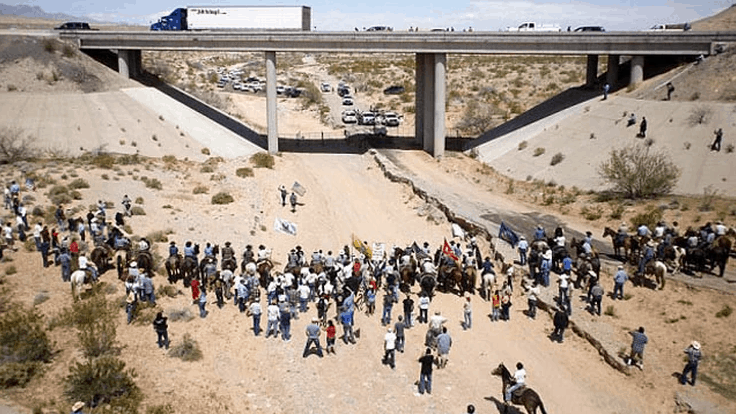 I don’t know how closely all of you follow the news, but if you’re like me, you probably skim through depressing headline after depressing headline just to make sure you’re caught up with the latest political scandals, Obamacare failures, stock market gains and losses, and other exciting stuff. However, once in a while a story will grab my attention either from a subject matter perspective or simply because it’s not the typical story. Such was the case a couple weeks ago when the story of Nevada cattle rancher Cliven Bundy versus the BLM or what has become known as the Battle of Bunkerville. The story didn’t reach the epic proportions in the media like I thought it would and should, but nevertheless it was a story that I’m sure would make a great movie. For those of you lost at this point, here are the basic facts of the story:

Wow…that sounds like something out the old west. There’s a lot to think about in that one story including states rights, ownership of public lands, state’s militias, freedom of speech, and many others.

Personally, I applaud the private citizens that showed up well armed and well within their rights to draw a line in the sand and tell the government that they will not allow one more American be bullied and pushed around. Heck, this is the EXACT reason the 2nd Amendment was written, to keep the thugs and thieves in our government in check. Now before you start to write me a hot email, I don’t condone Mr. Bundy’s non-payment of taxes because I do believe that you need to live by the laws of the land. There are other ways he could have gone about getting his point across than by giving free grazers a bad name. So there’s my quandary in this story, I applaud the patriots, but not sure I stand with the man in the middle of the controversy.

Some interesting points and questions that spring to my mind are:

What are your thoughts on Mr. Bundy and the “Battle of Bunkerville”?