A Matter of Perspective

This week’s blog post is by Doug Goldberg, managing partner of Goldberg Law Center, P.C. It provides an interesting twist on a familiar story. Hope you enjoy it!

You would be hard pressed to find someone of school age that has not heard of the Titanic – the famous British passenger liner that sank in the North Atlantic Ocean, about 375 miles south of Newfoundland, in the early morning hours of April 15, 1912, after colliding with an iceberg during its maiden voyage from Southampton to New York City.There were an estimated 2,224 passengers and crew aboard, and more than 1,500 died, including Thomas Andrews, the ship’s architect and Capt. Edward Smith who “went down with the ship.”

The ocean liner carried some of the wealthiest people in the world, as well as hundreds of emigrants from Great Britain, Ireland, Scandinavia and elsewhere throughout Europe, who were seeking a new life in the United States. The first-class accommodation was designed to be the pinnacle of comfort and luxury, with an on-board gymnasium, swimming pool, libraries, high-class restaurants and opulent cabins. 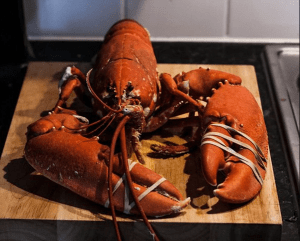 As you might expect, first class passengers were also treated to the finest food delicacies of the day such as Grilled Mutton Chops, Chicken a la Maryland, Quail’s Eggs in Aspic with Caviar, Poached Salmon with Dilled Mousseline Sauce and Cucumber, Tripe Stew, and Lobster Thermidor with Duchesse Potatoes. “Lobster,” you say? Excellent! That’s what I would’ve ordered if I was there. I love lobster! One of our New Year’s Eve family traditions is to have a seafood fest, involving, shrimp, crap and fresh Maine lobster. It’s an amazing way to ring in the new year! However, not many folks know that in Colonial times, lobster was actually considered the poor man’s chicken and fed to pigs and goats and only eaten by paupers. Lucky animals and paupers….

Back to the Titanic. I haven’t confirmed this, but I would surmise that, based on the overall extravagant experience of being a Titanic first class passenger, the lobster served on board that fateful night was fresh lobster, meaning that the lobsters were alive right up until they were dropped in a pot of boiling water. Looking at the Titanic’s fateful voyage from the lobsters’ perspective, what should have been their final voyage actually became a joyous occasion, a homecoming of sorts. The three hours between the collision with the iceberg and the sinking of the ship was simply a good time for the lobsters to make preparations to return home, to the ocean. So while approximately 1,500 passengers and crew members were evacuated in lifeboats, and over seven hundred more were rescued a couple of hours after the ship foundered, the lobsters merrily made their way to the murk and mud at the bottom of the ocean and rejoiced with a homecoming meal of North Atlantic Bottom Dwellers including clams, snails, and crabs, with seaweed and saltwater sauce.

The final survivor of the sinking, Millvina Dean, age two months at the time of the disaster, died in 2009 at the age of 97. Experts believe that lobsters can grow up to four feet long, weigh as much as forty pounds and can live 100 years or more. Therefore, it’s possible that some of the lobsters who made it off of the ship that night may still be alive and well! We would certainly welcome any of them to celebrate at our upcoming New Year’s Eve bash.

Ultimately, I suppose, our outlook on things that happen in our lives may well be a “matter of perspective.” While the sinking of Titanic was one of the deadliest commercial peacetime maritime disasters in modern history, to the lobsters in the ship’s galley that night, it was nothing short of a miracle.