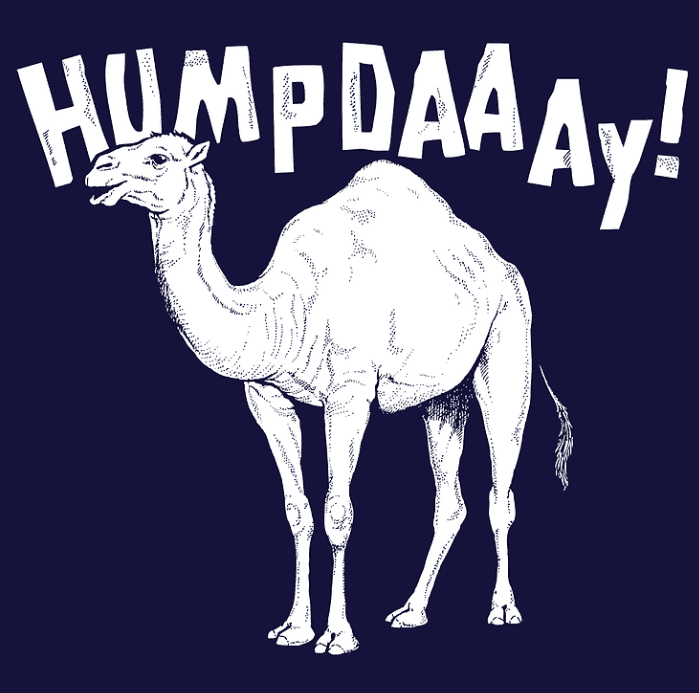 Hallelujah!, Today is Wednesday! You know what that means right?!  Some would say “the day of the week between Tuesday and Thursday.” Others might say “hump day” meaning the middle of the work week and it’s all downhill to the weekend! My 11th grade French teacher would say “mercredi.” In Japanese, the word for Wednesday is 水曜日(sui youbi), meaning “water day” and is associated with the planet Mercury, 水星 (suisei) literally meaning “water star.” Many Christian churches schedule bible studies, small groups and prayer for Wednesday evening. According to the Thai solar calendar, the color associated with Wednesday is green.

An antiquated folk rhyme that recites the days of the week includes “Wednesday’s child is full of woe,” the 1842 rhyme Solomon Grundy states that he was “Married on Wednesday.”In Winnie the Pooh and the Blustery Day, the disagreeable nature of the weather is attributed to it being “Winds-Day” (a play on Wednesday). In Richard Brautigan’s post-apocalyptic novel In Watermelon Sugar, Wednesday is the day when the sun shines grey. And Wednesday Friday Addams is a female member of the fictional family The Addams Family.

I usually have no particular affinity for Wednesday. It carries no special place in my heart or life. However, THIS Wednesday IS particularly wonderful! In fact, it happens every two years in the US. It’s the day AFTER election day! That means NO MORE POLITICAL ADS! The road signs come down and end up in the landfills and the radio and television hucksters find other sources of revenue for the next year and a half until the scenario ramps up again onward to the next election.

It’s fascinating to me to listen to the arguments of political folks telling us why we should vote for this guy or that woman and why this amendment is good for us while voting in favor of the other side’s ideas will be catastrophic. Throughout the past several months, we have all witnessed the word “Spin” in action.

Spin is an interesting word with several definitions. It can be used as a verb, as in “to  turn or cause to turn or whirl around quickly,” like the spinning around on a dance floor It can be used as a noun, as in “ that pitcher’s curve ball had tremendous spin.” Even the word spinhas some “spin” to it.

In the political context, Spin is a pejorative term generally used to refer to the sophisticated selling of a specific message that is heavily biased in favor of one’s own position and that employs maximum management of the media with the intention of maintaining or exerting control over the situation, often implying deception or manipulation. Sound familiar?

Spin techniques include careful timing in delivering information, selective presentation of facts, careful selection of words and phrases meant to invoke certain responses in hearers, choice of sound bites, or redefining of terms and phrases. Skillful practitioners of spin are sometimes pejoratively referred to as “spin doctors,” “spin merchants,” or “spinmeisters,” among other unflattering terms.

Unfortunately, with people being so busy and having such full lives today, even though we intellectually understand that the person delivering the message has a vested interest in communicating that message to have a very specific, desired outcome, often to the neglect of delivering the full truth of a situation, we tend to believe what is said anyway, without doing any investigation of our own. In short, we believe the “spin” not the truth.

Spin is harmful to our unique political system. And it is harmful in other ways as well. Take for instance, the numerous television, radio and direct mail ads that tout estate planning and business formation as a simple, inexpensive, “one size fits all” processes that you can do in the comfort of your own home, with little investment of time or money. Nothing could be further from the truth! The folks that advocate such nonsense are no better than the political hucksters. They spin you into buying something you know is too good to be true and deliver a false sense of security.

The next time you see one of those ads, PLEASE just understand it for what it is – a thinly veiled attempt to get you to spend your hard earned money on something that has no chance of delivering true peace of mind. Spin, at its finest. Then call us. We have been helping families with their estate and business plans for over thirty years. And we’d be delighted to see if we can help you. We’ll tell you the truth, with no spin.