Worth the Read: American Gun 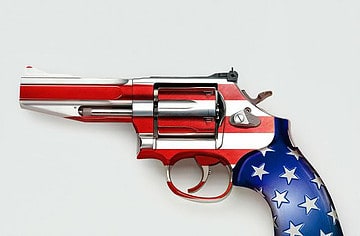 “Perhaps more than any other nation in the world, the history of the United States has been shaped by the gun. Firearms secured the first European’s hold on the continent, opened the frontier, helped win our independence, settled the West, kept law and order, and defeated tyranny across the world.”

Like many of you, my New Year is full of resolutions. Some that I won’t keep, a couple that I hope I will, and one that is a guarantee. My guaranteed resolution for 2014 is to read more. I’ve always been a voracious reader, ever since I learned to read. Fiction or non-fiction doesn’t really matter to me. However, in the last year, I really haven’t picked up many books and that needs to change. With that being said, I would like to recommend to you a book that I’m still reading, but that I can’t put down. The book is entitled, “American Gun: A History of the U.S. in Ten Firearms.” Now, as many of you may or may not know, I’m a self-proclaimed gun nut, a licensed FFL, gun dealer, and a staunch supporter of the 2nd Amendment. So this book is right up my alley!

The author of this great book has only written one other book and won’t be writing any more books. The author is the late American hero, Chris Kyle. If you haven’t heard about Chris, do yourself a favor, open a new tab in your internet browser, and google him. Chris was the most lethal sniper in American history. He was a Navy SEAL and a true American patriot. He had over 166 confirmed kills and 255 probable, including a confirmed kill at 2,100 yards. Makes me glad that guy was on our side. That record earned him the nickname “the Devil of Ramaadi” and the enemies of America offered a bounty for his head. Chris and his good friend Chad Littlefield were killed on February 2, 2013 by another Marine suffering from PTSD while they were out all out at a ranch/shooting range that helps wounded vets. I would urge you to google Chris and read up on what a true American looks like. Now, back to the book.

While it doesn’t read like a novel by Stephen King, James Patterson, or the rest, American Gun reads more like a conversation you’re having with a friend. In the book, Kyle picks the top 10 guns that he thinks had a profound impact on U.S. history and in making us the world power that we are. It’s historical, technical, and just plain fun. Heck, even I’ve learned a few things about guns from it. For instance, do you know which President had his own private shooting range at the White House and was instrumental in the development of several weapons? What about the man that holds 128 US patents for firearms including the iconic M1911 pistol, M2 machine gun, as well a the Model 1886, 1892, and 1895 repeating rifles? You’d be surprised to know the answers.

If you love American history, love firearms, or just like a great read, pick up a copy of American Gun. Let me know what you think, maybe we’ll put out a list of our own 10 greatest firearms.